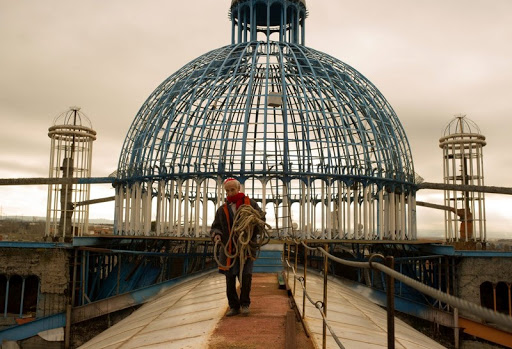 For the past 50 years, a cathedral made of trash has steadily risen above the small town of Mejorada del Campo, just outside Madrid, Spain.

One man is behind it all: a former Trappist monk named Justo Gallego, or Don Justo.

He started building the church in 1961, after a bout with tuberculosis forced him to leave the monastery where he lived. He sold some of his inherited land to raise enough money to start construction, using salvaged materials like donated bricks and oil drums to build it.

Incredibly, Justo has no architectural or construction experience. Occasionally, volunteers will help him with the work, but most of it he does himself. He doesn't even have any formal design plans - he told the BBC in 2010 that all of the details for the 24,000-square-foot church are "in my head."

Critics call him a madman and his cathedral trash, and the town seems to have turned a blind eye to how neither his materials nor the building itself meets construction codes.

Still, the building shows a remarkable beauty and attention to detail.

"If I lived my life again, I'd build this church again, only bigger. Twice the size," he said to the BBC. "Because for me, this is an act of faith."